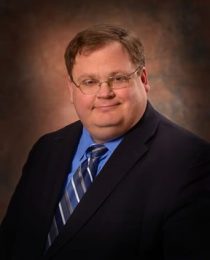 Sam obtained his undergraduate degree from the Catholic University of America in Washington, D.C. After graduating, he was presented with an opportunity to work with Representative Mel Hancock, a congressional representative from Missouri. Sam seized the opportunity while maintaining his personal ambitions of becoming a lawyer.

After moving back to Springfield, Sam joined the team at RGG Law in 1998. He specializes in social security disability and is part of both RGG and Parmele Law Firm’s team of legal professionals. He considers RGG Law to be a full-service law firm that focuses on serving the client through difficult circumstances.

Outside the office, Sam enjoys being involved in the Springfield community. He serves as the Den Leader for Cub Scout Pack 214 and on the St. Agnes Council for Knights of Columbus. He also enjoys coaching youth baseball through the YMCA.